The Pontoon 21 Crack Jack found its way into my tackle box about a year ago and has been a firm favourite ever since. Upon first sight the first thing to catch my eye was a high quality finish that was up there with many of the “big name” lure brands. Now it has often been said that colours and appearance are better at catching anglers than fish as fishing is after all, one of the greatest accessory sports ever! However the performance prior to purchase is what keeps an angler coming back for more and my tackle box is never without at least a few of these versatile lures.

The Crack Jack range itself comes is versatile and covers most estuary and bay conditions and also several freshwater applications. Probably the most expensive application I have used my models for, and the dominant demand in the market is the bream fishing scene. Several anglers frequenting the tournaments, myself included, rely quite heavily on these lures for their canal and flats options. The Crack Jack 38SP-DR is the go to for these situations. Diving to between 1 and 1.4 metres, they make a perfect flats and weed bed lure and dive low enough to entice bream out from under pontoons and other canal style structure.

The next model up is the Crack Jack 48SP which comes in 3 depths allowing anglers to cover more diversity in the water column. As the name suggests these lures measure in at 48mm making them completely applicable to all but the most finicky bream, yet exhibit a larger profile which often entices a wider range of target species. One of the most successful techniques I have found with this lure twitching it away from weed beds in impoundments while searching for Australian bass. Being a suspending lure and susceptible to the tiniest rod twitches, the Crack Jack can be retrieved away from weed beds using an extremely slow, yet active presentation which most Australian bass hunting small shrimp and baitfish find irresistible. A sensitive rod in these situations allows an angler to impart incredible action in short precise bursts.

The last model in the range is the Crack Jack 58SP which also features 3 diving depths. This lure has been extremely successful for me when chasing flathead in anything up to 2.5m meters. In fact the medium to deep diving models are fantastic in slightly shallower than rated waters. Fishing the lures in this way causes the bibs to dredge the bottom slightly like appearing (I am assuming) to a flathead like a whiting or poddy mullet scavenging the sand for debri. These lures have also accounted for several other predatory species including mangrove jack and sooty grunter. These lures are made tough featuring Owner hooks and split rings but a treble upgrade is recommended for sooty grunter. 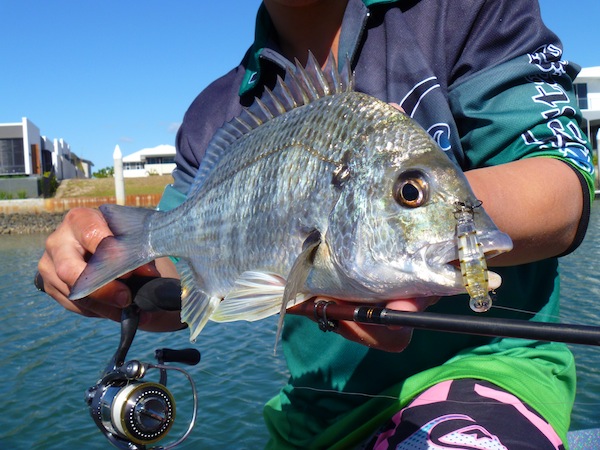 The Searing Tackle website discusses how these lures feature a Magnetic Force Balance (MFB) system which combined with the aerodynamic body design allows the Crack Jack to achieve great casting distances and even better accuracy.

By far and away the most commercially popular colour schemes for the Crack Jack range are the “Tiger Prawn” selection which includes 4 models. While being a fan of these colours (as I am with most transparent, natural appearing hard bodies), the “Threadfin Shad” is actually my pick of the litter. This subtle, natural appearing lure has by far and away accounted for the most (and better) fish for me personally. As previously mentioned the finish is exemplary giving the lure that high end Japanese appearance it deserves, yet at an affordable price.

In short, for the price point and quality of these lures I would suggest them to any angler participating in any of the aforementioned applications. They not only account for their fair share of fish, but really allow the angler to experience the essence of imparting action into the lure, as opposed to simply casting and retrieving.

When the idea of starting Hooked Up first entered my mind around 10 years ago, one of the things I used to sit and think about in my naivety was “I’ll get sent Stellas to review”. As a die-hard tackle enthusiast the ...

A few issues back I reviewed the new Black Magic KLT, the target species was snapper and I was very impressed with Black Magic’s new inline circle hook – you can read the full review at hookedup.com.au. As promised in...

Chasebaits is a relatively new brand and concept to hit the Australian market. It’s part of River2Sea Australia, a company that has always refreshingly had a stronger leaning towards innovation rather than imitation. ...

Ask any group of anglers what they want from their sounder or GPS and you will get several different answers. Some anglers value 2D sonar over newer tech such as Down and Side Vision, while others are all about the be...